The APC Series is Going Racing

LONDON, ON – Since early March the COVID-19 pandemic has put the 2020 APC Series season in question, that question has officially been answered. Its’ time to go racing! The APC Series will run a compressed 2020 season consisting of five events at three tracks across southern Ontario. Each event will be broadcasted live in partnership with GForceTV.

The series first two events of 2020 will take place at Canada’s Crown Jewel, Jukasa Motor Speedway. The Hagersville, ON speedway reopened its doors in 2017 to a twin 75 lap event and this format will once again be utilized to get things going in a big way for 2020. Back in 2017, when the series helped Jukasa with its grand reopening, Jason Hathaway was the star of the day collecting checkered flags in both events. Since then then the series has held three events at the former Cayuga Speedway, all have been won by 2017 series champion Brandon Watson.

On August 22nd, the series well head to the beach and make a trip to Sauble Speedway. This event will be a traditional 100 lap event. Sauble Speedway, home to the closest finish in APC series history, is always a fan favourite on tour. The speedway located just minutes from the famed Sauble Beach has played host to some incredible events throughout the APC Series history. The track has played host to six series events and the 2019 series champion, Matt Pritiko, leads the way with three victories to his credit, including the previously mentioned closest finish in series history.

The fifth and final event of 2020 will see two firsts in series history; the season will conclude for the first time at Jukasa Motor Speedway on September 26th and the series finale in 2020 will be a 150-lap event. Only 1 series champion has been able to close out the season with a victory, that being Andrew Gresel at Delaware in 2016. How will a 150-lap event play into the series finale and how will the teams manage the longest event thus far in series history? Many questions will be answered on September 26th.

While the global pandemic has certainly changed many things for many people in 2020, the APC Series is looking to rebound with an exciting 2020 race season. These five events will be broadcasted live for everyone to see on GForceTV. The series and tracks wish capacity crowds could attend these events, however with the current phase guidelines it is simply not in the cards at this time. Regardless, fans, drivers and sponsors alike will be delighted with each event being brought to their homes via live broadcast and everyone will be able to enjoy the APC Series once again in 2020! 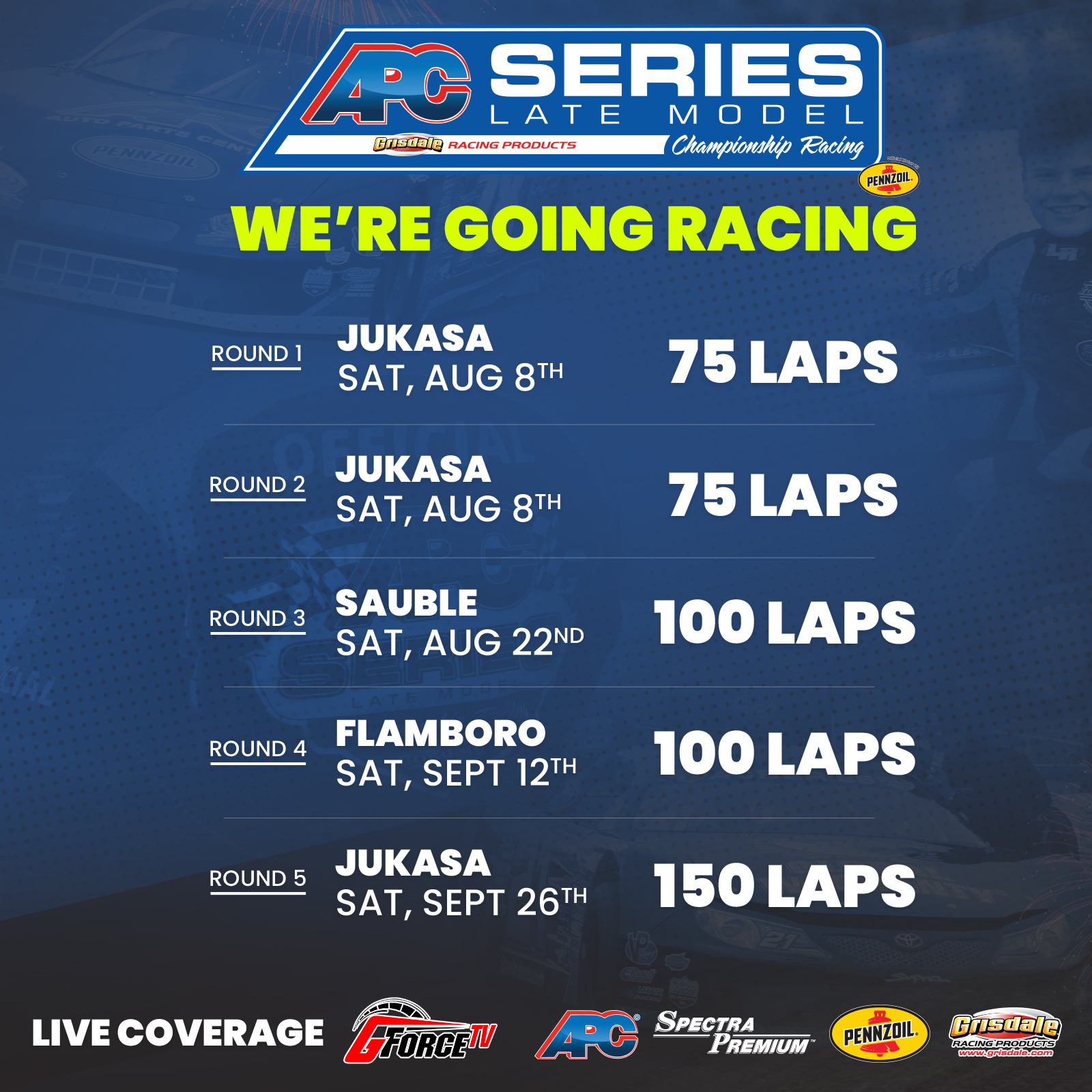